Week 7 has come to a close and featured some incredible advances on several of our top priority bills even in the face of ugly and fierce opposition.

The week began Monday afternoon with HB 5, the late-term abortion ban protecting the unborn after 15 weeks, which passed the final Senate committee stop. The Senate, to help the bill proceed quickly, had tabled their version, and took up the House version that passed the full House floor last week. Pro-life champion and bill sponsor Sen. Kelli Stargel once again introduced the bill, listing the advances in science showing the development of a child between 15-24 weeks and mounting evidence showing the ability for the baby in utero to feel pain. Public testimony included a post-abortive woman who shared her emotional and mental trauma from her abortions and the importance of passing HB 5 to defend life. Another speaker shared the story of his mother, a victim of human trafficking, who was very close to being aborted. He emphasized the reality that all lives are precious, regardless of the circumstances of conception.

FFPC Legislative Director Aaron DiPietro testified in support of the bill, highlighting the issue of the late-term abortion problem in Florida and the bill’s concrete and immediate protections provided to the unborn. During the committee debate that followed, Sen. Kathleen Passidomo’s comments stood out vividly. She laid out the science and reasoning again for supporting HB 5. Sen Stargel also argued against adding exceptions in the bill for rape and incest and argued for defending the lives of all babies. The bill passed the committee immediately after and has one final vote at the Senate floor before the governor’s desk.

Tuesday afternoon, HB 7 – The Individual Freedom Act, which restricts CRT in public schools and other places, was heard on the full House floor. Rep. Bryan Avila, the bill sponsor, defended the bill for over an hour. He argued for setting clear standards on the teaching of history and keeping racist ideologies out of the classroom. Opponents on the floor accused Avila of seeking to revise history and grilled him on accusations of censorship. Avila passionately argued the opposite, that the bill was seeking to ensure true history was taught. The supporting legislators spent another hour or more defeating opposing amendments.

Immediately afterward, the House floor finally heard HB 1557 – TheParental Rights in Education Act, the now nationally infamous bill facing attacks all the way up to the White House. Under incredible pressure and facing very hostile questioning for nearly an hour, bill sponsor Rep. Joe Harding passionately defended parental rights and refuted opposition. Retaining stellar poise, he masterfully stayed focused on the text of the bill. He emphasized the need to empower parents, give them rights, and provide them tools to hold schools accountable. He advocated for parents to be informed on critical decisions regarding their children’s emotional, mental, and physical health and well-being.

The next hour, the representatives shot down a number of hostile amendments with one exception: a clarifying amendment brought by Rep. Harding. The amendment streamlined the timelines for school districts to notify parents on policy changes regarding their students and also added extra pathways for parents to pursue action against hostile school districts. The amendment passed.

Thursday afternoon, the full House floor took up both HB 7 and HB 1557 for final debate and final vote, with FFPC’s Aaron DiPietro again present. First up was HB 7. If faced two hours of contentious debate, mostly consisting of inaccurate accusations by opponents. Among the accusations was that the bill forces censorship of history, and supporters countered that the bill protects the teaching of history from political propaganda. Bill sponsor Rep. Bryan Avila and Rep. Randy Fine gave the strongest defenses of the bill by describing what the bill actually does, namely prohibiting the forced teaching of the following ideas:

The bill passed shortly after, 74-41 on a party line vote.

Immediately following, the House took up HB 1557, the Parental Rights in Education Act, falsely labeled the “Don’t Say Gay Bill” which we in turn have named the “Don’t turn my son into a daughter” bill.  Over the hour-and-a-half debate, bill opponents railed against the bill, saying a vote for the bill would be a direct attack on select children and make one an opponent of the LGBT-identifying groups. They also falsely claimed that the bill banned certain words through bureaucracy, based on fear rather than fact. Tensions were high, and sharp comments were directed at the bill sponsor, Rep. Joe Harding. Supporters, by contrast, continued to go back to the bill’s fundamental purpose outlined in the bill text: defending parental rights in education.

Highlights in debate in support of the bill included Rep. Jenna Persons-Mulicka appealing to parental love and care for their own children being one of the most powerful forces for good, a force that government had a duty to protect; Reps. Juan Fernandez-Barquin and Kaylee Tuck affirming that such issues over sexuality and identity did not belong in K-3rd grades and criticizing the war on parental rights being conducted against parental rights by Florida school districts; Rep. Erin Grall passionately listing specific examples of attacks on parental rights in Florida schools; and Rep. Randy Fine closing debate by calling on his fellow reps to protect parents from opposing school districts, rather than allowing school districts to “protect” children from their own loving parents to further the school’s agendas.

In closing, Rep. Joe Harding asked his fellow members to peel away the alternate reality of media hit pieces, click bait internet stories, and Twitter ramblings, and return in the real world centered on the actual text of the actual bill before them. Empowered and engaged parents, regardless of backgrounds and beliefs, lead to better education opportunities for their children and overall a better quality of life for all children, he asserted in closing.

Also, below some of the bills is an Action Alert in Red, signifying upcoming bills that will be heard this week, providing opportunities for supporters to attend and show support for those bills. 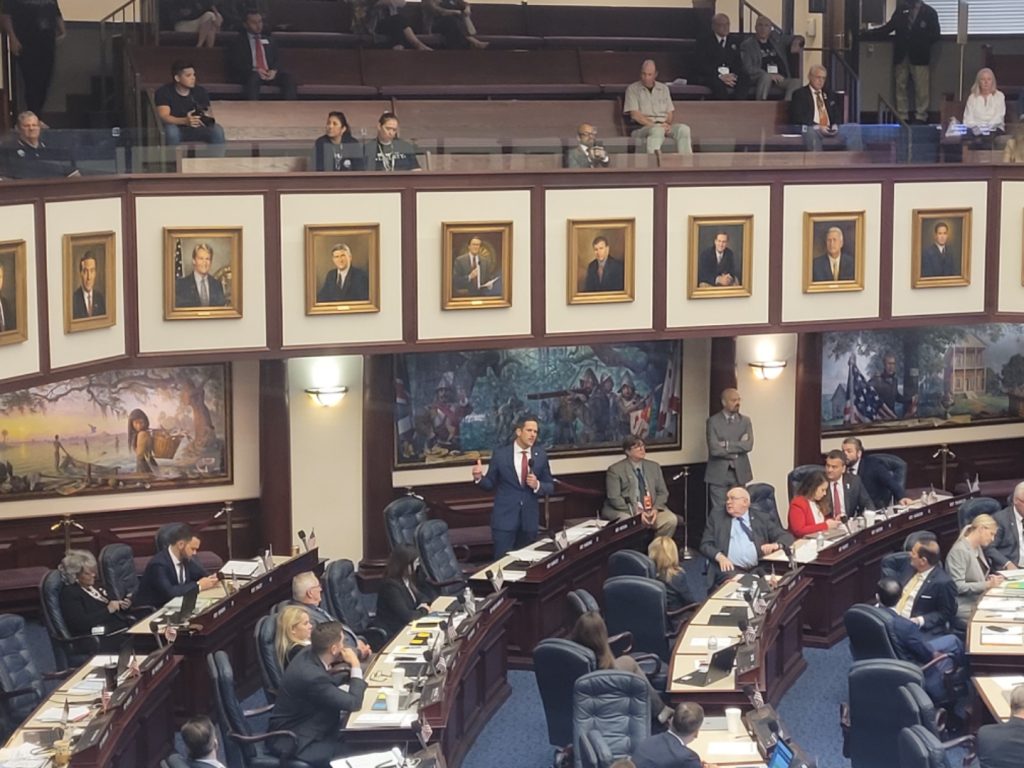 Status: SB 148 is in Rules committee as the last of 2 committee Senate stops. On Thursday, the House version (HB 7) passed the full House 74-41.

Status: On Thursday, HB 1557 passed the full House floor 69-47. The Senate is taking up HB 1557, the House version, and sending it to one final Senate stop, the Appropriations Committee.

ACTION ALERT: HB 1557 will be heard in its final Senate committee meeting, Appropriations, on Monday, February 28th (the committee begins at 10:30 am) in 412 K in the Knott Building.