Week 6 has come and gone and session is over two-thirds complete! This week was filled with exciting advances on three of our top priority bills!

On Monday, Rep. Brad Drake presented HB 687, the Free Speech for Healthcare Practitioners Act, in its first House committee Professions and Public Health. Rep. Drake succinctly articulated the threat to free speech for physicians in Florida and the solutions provided in the bill. Multiple physicians testified, sharing their stories of threats against their free speech.

FFPC’s Aaron DiPietro also testified in support of the bill, once again maintaining that private medical certification boards given police powers over medical professionals have no right restrict the free speech of doctors under their oversight. He also reminded the committee that the free exchange of ideas and debate in medicine was crucial to the very advancement of science and medical progress. Watch the video below.The bill passed shortly thereafter.

Thursday evening, HB 1557, the Parental Rights in Education Act, the now nationally infamous bill facing attacks all the way up to the White House, was heard in the House Judiciary Committee. Bill sponsor Rep. Joe Harding answered opponent House reps’ questions on the text of the bill, highlighting the right of parents to be informed and involved in their children’s educations. Opponents in public testimony said the bill would silence students’ speech on sexual orientation and gender identity, despite absolutely no such language in the bill.

Proponents asserted that parental rights were fundamental and that the bill increased school district transparency. FFPC’s Aaron DiPietro emphasized the true nature and intent of the bill: to empower parents in engaging in their children’s educational success by increasing transparency in school district policy. He highlighted that contrary to critics’ claims, students were free to speak and discuss whatever they choose and organic discussion with teachers was not hindered. The bill only restricts official school districts from establishing planned instruction on sexuality issues in K-3rd grade. He emphasized the bill’s focus on protecting children by empowering parents to be engaged in their children’s lives and educations by increasing transparency in official school district policy, which was constantly ignored by the opponents. The video of his testimony can be viewed below.

As debate began, bill opponents on the committee criticized bill supporters’ testimony, leading to a public murmuring from the bill supporters in the audience which was promptly quieted by Chairwoman Erin Grall. Most of the debate against the bill by multiple representatives in opposition repeated talking points not at all related to the bill. Supporting reps, including Reps. Scott Plakon and Rep. Spencer Roach, brought attention back to the actual text and intent of the bill, emphasizing once again the crucial role of the state to protect parental rights. The bill passed immediately after debate concluded.

Finally, the highlight of the week centered around the full House’s passage of HB 5, the late term abortion ban protecting the unborn after 15 weeks in the state of Florida. Beginning Tuesday afternoon, pro-abortion representatives cross-examined bill sponsors Reps. Erin Grall and Jenna Persons-Mulicka for nearly 2 hours. Following the cross-examination, another 1 ½ hours was spent debating numerous amendments proposed by pro-abortion reps seeking to undermine the bill–all failed. The debate restarted the next evening around 7 pm; debate lasted an exhausting 6 hours, with the final vote occurring after midnight.

Highlights include some powerful pro-life testimony:

Rep. Dana Trabulsy shared the regret of her abortion and her desire to keep other women from the pain she endured; Rep. Michelle Salzman spoke of the horrors of personally experiencing both rape and incest, and yet affirming that as horrible as those situations are, none justify killing the innocent child. Reps. Mike Beltran and Cord Byrd addressed the legal and Constitutional issues at stake in defending life; Reps. Clay Yarborough and David Borrero passionately defended the humanity of the unborn; and Reps. Webster Barnaby, Melony Bell, and Scott Plakon shared personal stories of either they or their parents’ choosing life despite pressure to abort, with many other representatives that could be mentioned.

Bill sponsor Rep. Erin Grall, in spite of going through nearly 6 hours of debate, rose to the occasion, delivering an impassioned and heartfelt call for members to defend the children who could not defend or speak for themselves. Around midnight, as Rep. Grall was giving her closing statements, a crazy protest erupted in the gallery composed of proabortion activists, prominent among them, a group of primarily young men (ironically) chanting, “My body, my choice.” (Watch the video here or below.) The protestors actively resisted and fought the officers attempting to restore order, leading to the arrest of some. The bill passed off the floor 78-39, on an almost party line vote.  The only Republican voting against the bill was Rep. Rene Plasencia. The only Democrat voting for the bill was Rep. James Bush; two other notable yes votes were Republicans Mike Caruso and Sam Killebrew who had previously voted against pro-life legislation in prior sessions.

Florida Family Policy Council commends House leadership for taking the lead and defending the lives of the unborn, in spite of the fierce opposition, extremely long debate hours, negative media attacks, and time taken away from voting on other issues.

Below is an updated list of some of the top bills Florida Family Policy Council is tracking in this session, along with a summary of each and links to each bill’s text. The list has been updated based on the bills that are moving this session. You can always keep track of all ofthe good and bad bills on our website, which will be updated as new priorities arise.

Also, below some of the bills is an Action Alert in Red, signifying upcoming bills that will be heard this week, providing opportunities for supporters to attend and show support for those bills. Next week is shaping up to be an action-packed week for some of our key, top priority bills! 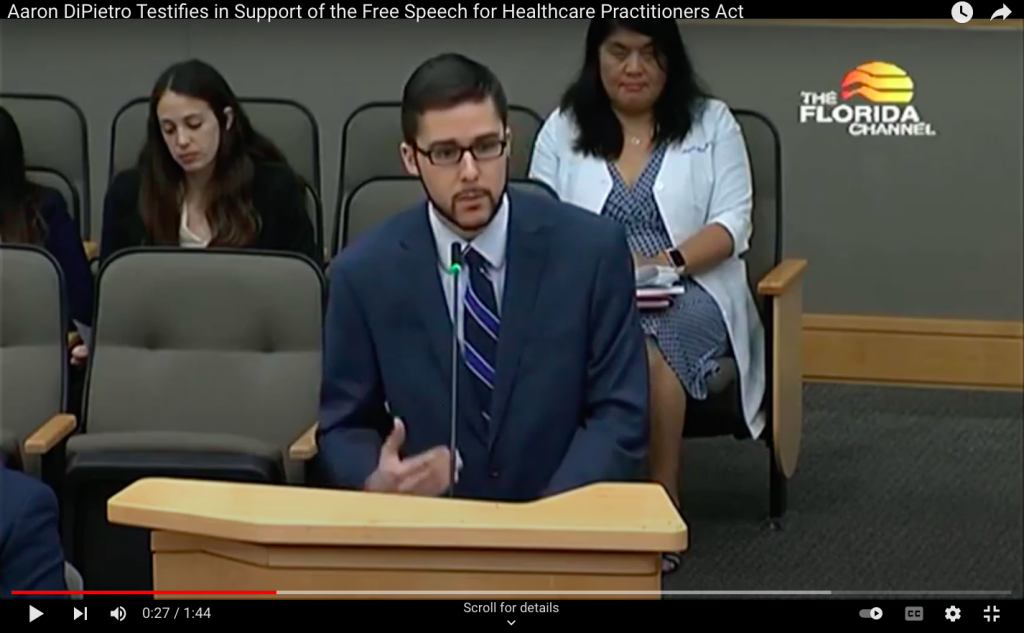 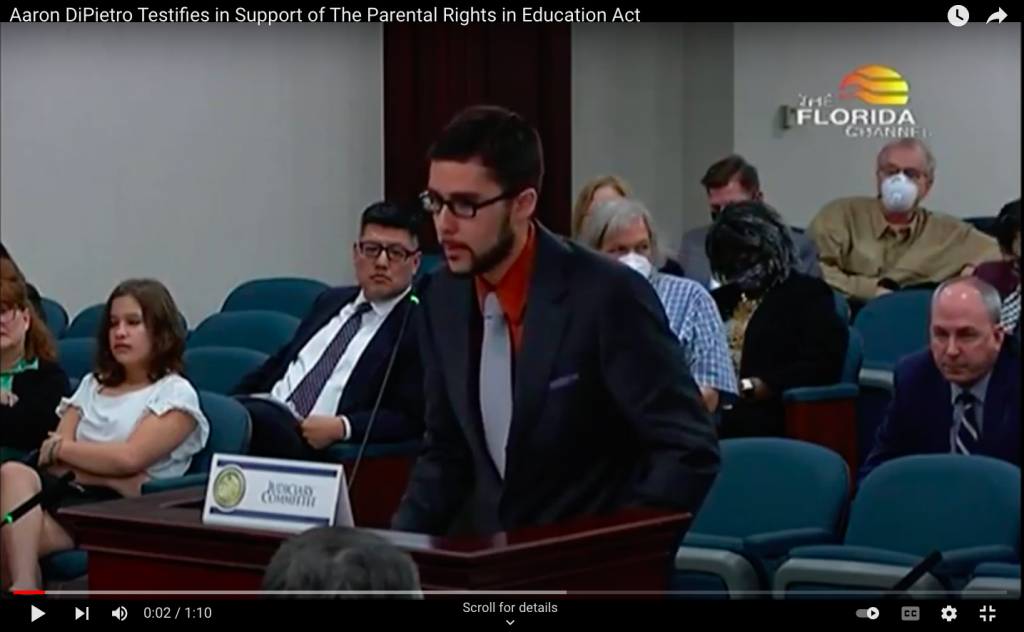 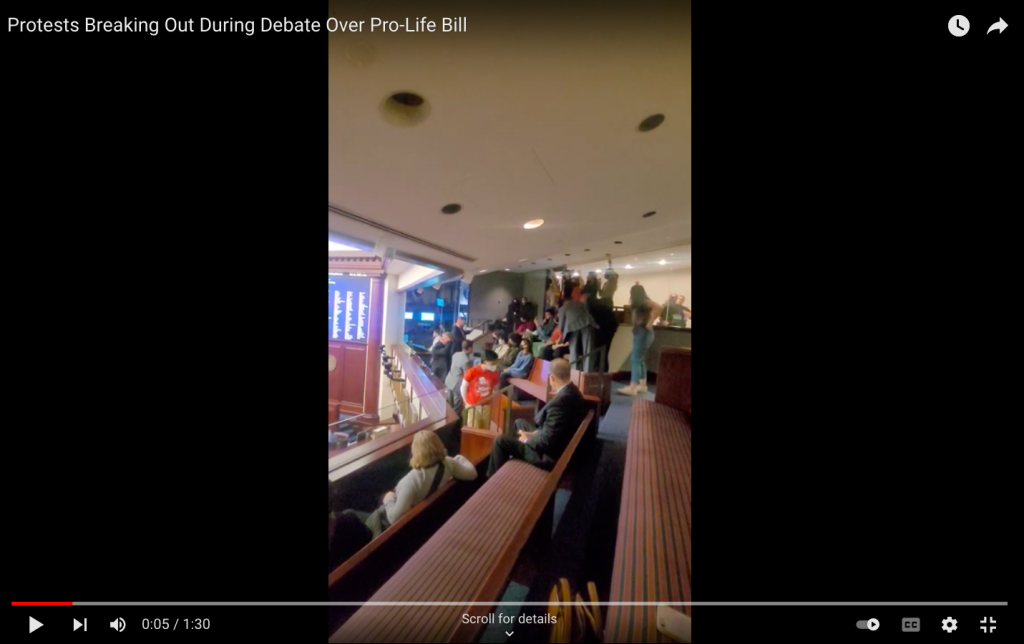 VIDEO: Protestors chanting in opposition during debate over pro-life bill

Status: HB 5 passed Wednesday, 78-39, off the full House floor. On the Senate side, SB 146 is going to a final hearing in its final Senate committee, Appropriations.

ACTION ALERT: The Senate will take up HB 5, the House version for the Senate Appropriations Committee meeting on Monday, February 21. The committee meets from 1-5 pm, with the hearing on HB 5 occurring most likely toward the end of the committee. The committee will meet in the Knott Building in Room 412K.

Status: The House version (215) is now waiting for a final House floor vote; the Senate version passed the full Senate floor 31-3 and has been sent to the House. Florida Family Policy Council was instrumental in suggesting additional language to further strengthen equal protections under the law for religious institutions.

Status: SB 148 is in Rules committee as the last of 2 committee Senate stops. The House version (HB 7) has passed all committees and been scheduled to be heard and possibly voted on by the full House on February 22nd.

Status: HB 1557 has passed all its committees and is scheduled to be heard and possibly voted on by the full House floor on Tuesday, February 22nd. The Senate version, SB 1834, is in Senate Appropriations, the second of three stops.