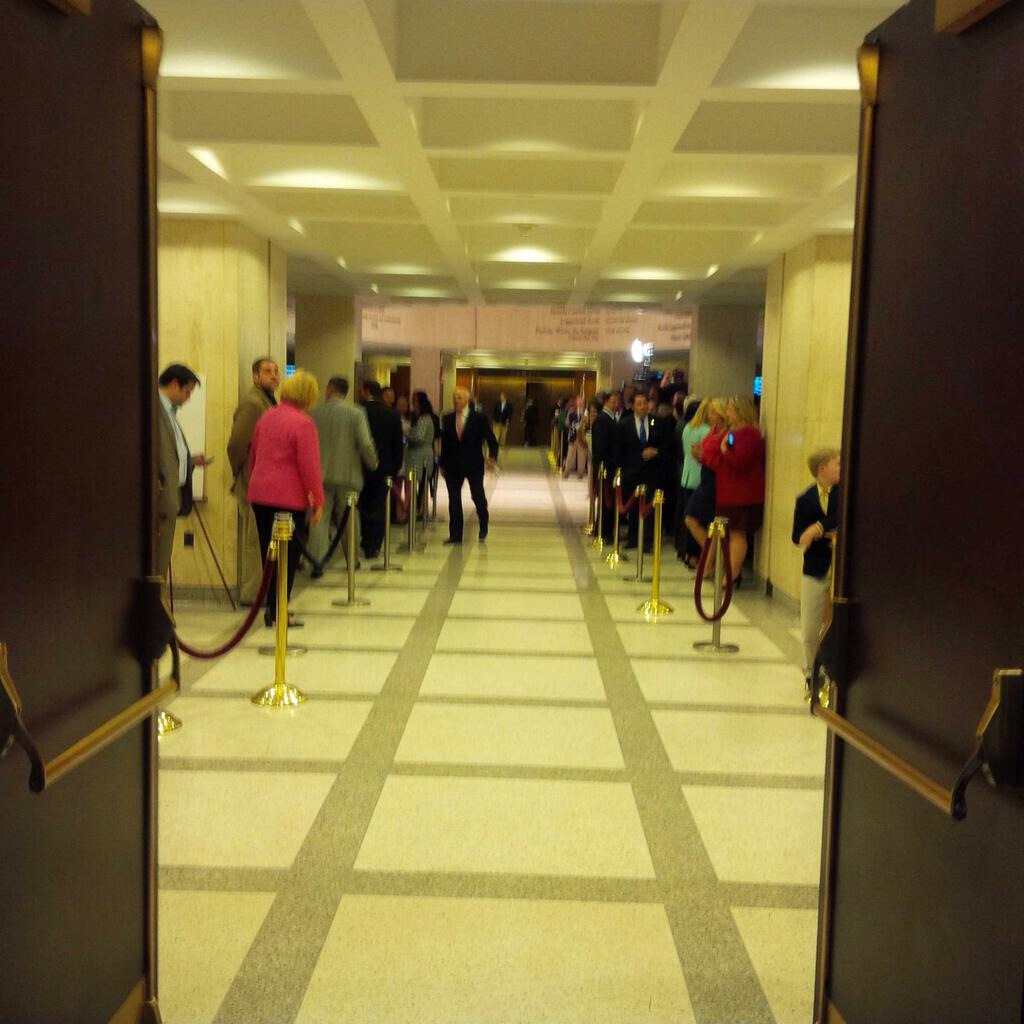 On Friday night the Florida Legislature adjourned the 2014 Legislative Session “Sine Die” (pronounced like “sign-knee-die”).  Sine Die is from the Latin meaning “without day”, or without assigning a day for a further meeting or hearing.  And so Florida’s constitutionally mandated 60-day legislative session has come to a close! This completes Speaker Will Weatherford and Senate President Don Gaetz time as leaders of their chambers and next year we’ll be welcoming Speaker Steve Crisafulli and Senate President Andy Gardiner. The tradition is that House and Senate leadership meet in the middle of both chambers to drop a handkerchief and make farewell remarks.

We had a great run this session with some solid victories.  To start off, every single one of the bad bills on our legislative agenda which we opposed either died or were dead on arrival when introduced.  So, GO defense!!!  At least a dozen destructive and counterproductive ideas are politically dead – at least for another year.  From expanding casino gambling on every coast, to granting special rights for homosexuals to sue Christians who live out their faith in the workplace, we had a 100% “kill rate” on all the bad bills we identified in our 2014 FFPC Legislative Agenda.

In terms of victories, two major pieces of pro-life legislation were passed, along two other good bills relating to prohibition of judges’ relying on foreign laws, and one bill protecting students and families against information gathering on Common Core curriculum.

Below is a summary of the legislative victories of the good bills that passed which now await the Governor’s signature or veto. 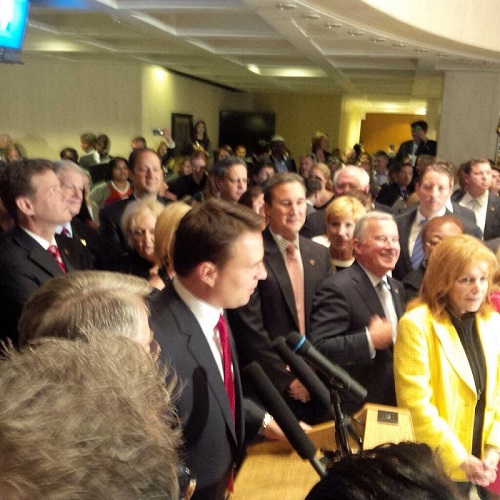 GOOD Bills Passed by the Legislature:

Justice for the Unborn- This bill creates the “Unborn Victims of Violence Act” which recognizes the death or injury (due to violence or vehicular homicide) of an unborn child as the death or injury of a second person.  As mentioned last week this is a historic win as this bill has been filed for seven years in a row and just finally passed.  This is a victory for the rights of the unborn and it places our laws and our culture one step closer to being pro-life.

This bill bans abortions if the doctor reasonably determines that the child has achieved viability. It provides strict exceptions if the mother’s life is endangered by the pregnancy or if the mother will suffer substantial and irreversible physical damage by continuing the pregnancy.  This bill makes Florida’s abortion ban as early as possible without violating Roe vs. Wade or Florida’s artificially manufactured abortion rights in its state constitution. By banning abortion of viable fetuses we create a moving target for abortion ban as technology improves to allow for earlier viability.

This bill prevents Florida judges from relying on the laws of foreign nations as precedent if they would violate existing Constitutional rights in certain cases.  Sharia compliant Muslims have as their own stated goal the creation of the  “Caliphate” which is a complete Islamic State where “Sharia” law would be imposed upon an entire society and eventually the world. This bill would prevent the reliance upon Islamic law by courts where to do so would violate existing state or federal constitutional rights. The bill could also be used to prevent a judge from relying on European or other foreign laws to find a way to advance leftist social agendas.

This good bill protects against some of the abusive aspects of the Common Core education reforms.  It regulates the collection and recording of student’s data. It also creates a process for the each school district to determine what information will be collected and who will have access to it. SB 232 prohibits the school district from collecting biometric data collection.

NOTE: It is expected that Florida Governor Rick Scott will be signing all these good bills into law.  We will keep you updated if the Governor needs encouragement or needs to hear from you on any of these matters.  We usually will not issue an action alert asking you to contact your legislators unless we learn in the legislative process that a given bill is in trouble or has critical swing votes needed.

Good Bills that Did Not Pass:

This bill bans abortion after 20 weeks, except in the case the child is not viable as determined by a physician through an examination of the woman and child. Physician must test and record the stage of fetal development, gestational age, weight, and lung maturity, in addition to any other tests the physician feels necessary to make the determination that the child is not capable of surviving outside of the womb with or without medical assistance.

This bill stops or pauses common core from being further implemented and performs an overhaul of the standards, beginning with the state board of education holding a community meeting in every congressional district in the state.

Common Core is one of the hottest topics in the state. Because the legislature wouldn’t hear this bill, opponents of Common Core State Standards are turning their attention to Governor Scott to rid this state of this federal overreach.

Marriage:  NOTE:  While not a bill, Florida’s Legislative Leadership failed once again to allocate any funding for marriage education programs, which is very disappointing.  This is one area the legislature must give attention to.  Florida has consistently failed to create laws which serve to strengthen marriages and reduce family fragmentation.  Some bill proposals require no funding at all, just leadership.  In future years, bills to promote and strengthen marriages will continue to be a major legislative priority for the FFPC.

All the bad bills we identified and opposed died!  With the exception of gambling, they weren’t even heard in a single committee! Several gambling ideas were heard in committee, but no consensus was reached.

This bill calls itself a mere domestic partnership but it is actually a full blown form of civil union or faux homosexual marriage attempting to give many of  the rights, benefits, and privileges of marriage. These bills are presently different, but have the same intention of recognizing domestic partnerships.  The real danger of these arrangements is that they are consistently used by renegade courts and legislative bodies as a precedent for advancing homosexual marriage arrangements.

This bill makes sexual orientation, gender expression, and gender identity impermissible grounds for discrimination.  One of the worst pieces of legislation, these statutory schemes are being used all over the country as a weapon to punish Christians.

This bill prohibits counselors and psychologists from counseling their patients under the age of 18 to change their sexual orientation, behaviors, gender identity, gender expression or to reduce or eliminate sexual or romantic attractions toward a person of the same gender.

This bad bill creates a Gaming Control Commission and Department of Gaming Control to provide for oversight of pari-mutuel facilities, slot machines, cardrooms, and gaming. Commission members are appointed. If the Florida legislature turns control of the gaming industry over to a commission we lose all accountability to the people.

SB 7050/7052/7054 Casino Gambling Package Expansion Bill – Proposed by the Gambling Committee/Sen. Richter.  These bills would create two new casinos in Florida, create a new state department to “regulate” gambling and would require a constitutional amendment for any gambling not presently allowed by law.

SB 98Expanding the Florida Lottery to Online Portals Lottery – Sen. Margolis (D)-  This bill would authorize the Department of the Lottery to create a program to purchase lottery tickets online.

Thank you very much for your support and for standing with us.  We would be grateful if you would help us with an online donation to help us continue to work as “Your Voice, for Your Values” in Tallahassee and beyond.  Thank you again.