The Reality of Late-Term Abortion 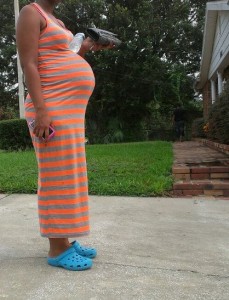 You may have already seen this picture, which has gone viral online and been covered on Fox News and other outlets. Elise was 20 weeks pregnant with twin girls on August 8th when she came to Orlando Women’s Center for a late-term abortion.

Several Christians were sharing the gospel at the clinic and offering help to the moms who come to murder their babies: ultrasounds, medical care, adoption resources, financial support, and anything else they need. They spoke to Elise, who told them she was a Christian but already had two daughters and didn’t want any more girls.

John, a Christian who has been ministering outside the Orlando Women’s Center every day (7 days a week) for two years, posted the picture on Facebook to ask his friends to pray that God would change Elise’s hard heart.

Elise went into the clinic and killed her babies.

The picture helped put a face to the reality that late-term abortions are perfectly legal and happen every day in the United States. In Florida abortions can be performed up to 24 weeks. 40 other states prohibit abortions after a certain point in pregnancy, but generally there are exceptions for “the health of the mother,” which can include such maladies as heartburn or emotional distress.

On July 31, a bill that would have banned abortions after 20 weeks in Washington, D.C. failed to pass the House by the requisite two-thirds majority. 203 Republicans and 17 Democrats voted in favor of the ban, while 148 Democrats and 6 Republicans voted against it. The result is that in our nation’s Capital abortions can be performed at any stage of pregnancy– even 38 weeks (full term).

After World War II, German citizens were taken on tours through the concentration camps. Many came out crying, saying “We never knew!” In America today, 20% of pregnancies end in abortion– well over 1 million babies per year.

We cannot say we do not know.