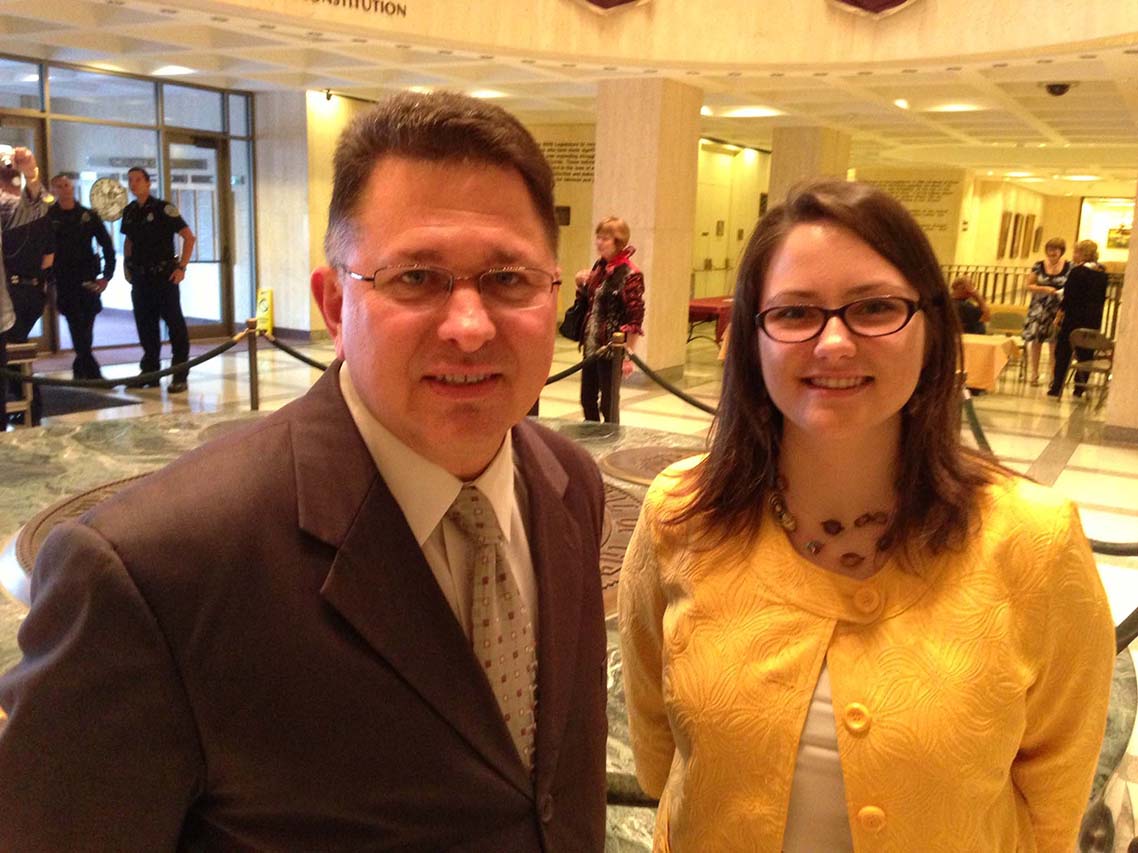 We have come to the end of another 60 day legislative session. This year has had some really high-profile victories and also some defeats.  I am more and more convinced each year that law and policy absolutely influences people’s values, attitudes and ultimately their behavior.  This motivates us even more to do what we do.  The Bible speaks of law as a taskmaster and a tutor.  Our prayer would be that man’s law reflects both the beauty and severity of God’s nature and character.

I really do want to thank Sara Johnson, my Legislative Assistant, who did a simply outstanding job this year in representing me personally and our organization in Tallahassee, while I was focusing on the campaign to save the Boy Scouts.  We were grateful to have Sara on our team.

Well, yesterday the Florida Legislature untypically on time for the 2013 Legislative Session. Below are the good bills that we featured in our legislative agenda which we supported and which made it into law and the bad bills we opposed which thankfully died:

NEW LAW:  Prohibition of Electronic Gambling Devices – anti-gambling
HB 155 by Representative Trujillo / SB 1030 by Senator Thrasher. This bill will ban internet cafes.  The resignation of Lt. Governor Carroll due to ties within the internet café industry provided the head wind that pushed this bill through both chambers to the Governor’s desk with only 4 Senate nays and 7 House nays. Internet cafes are already closing their doors. In about 1 month the Legislature managed to do what we have been asking them to do for 3 years.

NEW LAW:  Children in Foster Care – foster parent standards
SB 164 by the Children, Families & Elder Affairs Committee / HB 215 by Representative Albritton.  This bill creates a “reasonable and prudent parent” standard for foster parents and would assist in providing normalcy for children in foster care.  This bill passed unanimously out of both chambers, and was approved by Governor on April 11.

PASSED:  Electronic Benefits Transfer Cards – restrictions on use of EBT cards
SB 1048 by Senator Gardiner / HB 701 by Representative Smith.
This bill prohibits the use of EBT cards in adult entertainment facilities, pari-mutuels, casinos, and certain alcohol vendors. This bill passed the Senate unanimously and the House with a (89-26) vote.

PASSED:  Victims of Human Trafficking – opportunity to expunge criminal record
SB 1644 & 1734 by Senator Flores / HB 1325 & 1327 by Representative Spano.
These bills provide victims of human trafficking the opportunity to expunge a criminal record they have due to the crimes they were forced to commit as victims.  All 4 related bills regarding human trafficking passed unanimously and are awaiting the approval of the Governor.

PASSED: Massage Establishments – human trafficking
SB 500 by Senator Clemens / HB 7005 sponsored by the Criminal Justice Subcommittee
This bill tightens regulations on massage parlors for the purpose of reducing human trafficking. This good bill passed both chambers with no opposition.

PASSED:  Infants Born Alive – pro-life
SB 1636 by Senator Flores / HB 1129 by Representative Pigman.
This bill would give babies born alive after attempted abortions all the protections of a child born alive in the course of natural birth.  This sensible bill passed unanimously out of the House and the Senate in the middle of the last week. Planned Parenthood’s botched testimony in an early committee gave this bill smooth sailing through the rest of the legislative session. However, this issue gained national attention with the Gosnell trial and the recent Live Action films. We are still awaiting a charge in the Philadelphia abortion house of horrors that Dr. Gosnell ran and Live Action is proving that Dr. Gosnell’s inhumane, insanitary, and immoral office practices are not the exception, but the rule in the abortion industry. Please stay tuned in on Twitter, Facebook, and YouTube as the truth is brought to light on infanticide in this industry.

PASSED:  Independent Living – adoption & foster care
SB 1036 by Children, Families, and Elder Affairs committee.
This bill allows foster children to remain in the foster care children until the age of 21 instead of 18.  This bill passed both House and Senate and is now waiting on the Signature of the Governor.

Good Bills That Did Not Pass
Marriage Handbook– Educational Resource for Newly Wed Couples
SB 1586 by Senator Kelly Stargel / HB 1163 by Representative Dennis Baxley
This great bill which we have tried to pass for many years was moving rapidly in the House but the Senate President assigned the bill to the Children and Families Committee chaired by Senator Eleanor Sobel who is both unapologetically anti-marriage and anti-family.  The bill was never heard in that first assigned committee in the Senate and therefore died.

Application of Foreign Laws in Certain Cases – restrictions on judges
SB 58 by Senator Hays / HB 351 by Representative Metz.
This bill prohibits Florida judges from referring to laws of other nations for Florida court decisions. This bill passed all of its House committees, the House floor, and 2 Senate committees. It was brought to the floor of the Senate when it died in procedural vote. Every bill’s action can be objected and voted on. The Democratic Minority Leader Sen. Chris Smith objected to a motion so there had to be a 2/3 vote to move the bill. We were one vote short of a 2/3 vote. Read a news story regarding this bill dying at the last minute here http://www.tampabay.com/blogs/the-buzz-florida-politics/bill-to-ban-unconstitutional–foreign-law-in-florida-courts-dies-on-last/2118973

Offenses Against Unborn Children – recognition of life
SB 876 by Senator Stargel / HB 759 by Representative Ahern.
This bill creates the “Unborn Victims of Violence Act” which recognizes the death or injury (due to violence or vehicular homicide) of an unborn child as the death or injury of a second person. This bill passed all of its House committees, the House floor and all but one of its Senate committees. The Senate President could have pulled this bill from that committee directly unto the Senate floor but decided not to, probably in an effort to be bi-partisan.

Termination of Pregnancy Based on Sex or Race of Unborn Child – pro-life
SB 1072 by Senator Evers / HB 845 by Representative Van Zant.
This bill prohibits abortion due to the race or gender of the unborn child.  This controversial bill passed all of its House committees and the House floor but was never heard in a Senate committee. Its first committee reference was Health Policy, chaired by Sen. Aaron Bean (R-Jacksonville). His committee was assigned a lot of controversial issues that took a lot of time, preventing good bills from being heard. (His own health care bill died in his committee) He was probably hesitant to bring this bill up due to the debate (and therefore, time) it would require. It will probably come back next year. This bill brought up black genocide through abortion during debate on the House floor and a lot of the democrats walked out of the chambers in protest.

DEAD:  Equal Rights for Men and Women – ERA Feminist Legacy Bill
SB 54 by Senator Joyner / HB 8001 by Representative Berman.
This bill would ratify the proposed ERA amendment to the Constitution of the United States.

DEAD: Online State Lotteries – Expansion of Gambling
SB 266 by Senator Margolis / HB 275 by Representative Gibbons.
This bill would authorize the Department of the Lottery to create a program to purchase lottery tickets online.

DEAD: Sweepstakes Devices – Limiting and Regulating Internet Cafes
HB 951 by Representative Patronis.
This bill would ban new internet cafes from opening for a period of two years so the Legislature can study the effects of gambling. We oppose this bill because we don’t want to ban all NEW cafes; our priority is making all of them illegal.

DEAD:  State Group Insurance Program – Insurance for Domestic Partners
SB 1086 by Senator Abruzzo / HB 929 by Representative Stewart.
This bill would allow a same-sex domestic partner of someone enrolled in a state group insurance program to be qualified as a covered dependent.

DEAD:  Medical Cannabis / Public Records Medical Use of Cannabis – Medical Marijuana
SB 1250 and SB 1214 by Senator Clemens.
These two bills would legalize marijuana for medical purposes and create a non-public registry of users.

DEAD:  “Families First“ – Same-sex marriages/ Civil Unions/ Domestic Partnerships
SB 196 by Senator Sobel / HB 259 by Representative Pafford.
This bill calls itself a domestic partnership but it is actually a full-blown civil union attempting to give all the rights, benefits, and privileges of marriage.  The Senate bill was heard 3 times in the Children, Families, and Elder Affairs committee and finally passed with Sen. Diaz de la Portilla absent (he was in his district). This bill seeing the light of day was a small win for gay rights activists. This is a rare case where the Democrat sponsor of the Senate bill was also the Chairwoman of the Children, Families, and Elder Affairs committee (which happened to be the bill’s first committee). As chairwoman she decides what bills are heard. She had to bring this bill up 3 times before she allowed any votes to be cast. I think that speaks to how un-popular this issue still is in the state of Florida.

This session has been one with many victories! There were a couple tough defeats and, sadly, most of the good bills that did not make it were bills that had been through the process before. Both the Foreign Law and Offenses Against Unborn Children have been through several sessions and I look forward to promoting these good bills again.

The FFPC will continue standing for what’s right– even if at times we are standing alone. Thank you for joining us in our mission.