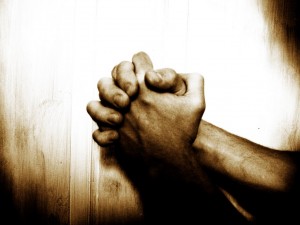 Atheists of Florida, Inc. sued the City of Lakeland because the City opens each City Commission meeting with prayer. In February, a federal trial court judge in Tampa ruled in favor of the City of Lakeland’s continuing to invoke meetings with prayer by visiting members of the clergy (of various denominations and faiths, as demonstrated in the past). Atheists of Florida is now appealing that decision in the Eleventh Circuit.

The legislators’ brief opens by explaining that they “benefit from the time-honored tradition of legislative prayer and wish to preserve it. … These legislators are concerned about recent Fourth and Second Circuit decisions that clash with this Circuit’s precedent and leave legislative bodies with no clear way to safeguard their invocation practices.”

The brief staunchly argues that the legislative prayer practice before Lakeland City Commission meetings does not violate the Establishment Clause of the First Amendment to the United States Constitution.

The document also points out inconsistencies in the precedents of cases in other Circuit courts. “Any standard that restricts or bans ‘sectarian’ references is unworkable and places the government in a Catch-22. All the government can do is adopt a religiously neutral selection process for inviting speakers to pray and respect the conscience of those speakers by avoiding control over their content where no ‘exploitation’ is evident. Marsh and Pelphrey provide a workable test, in sharp contrast to the hopelessly muddied decisions in Joyner and Galloway. The District Court correctly rejected Plaintiff’s claims, tracking precedent in this Circuit and the Supreme Court.”

At FFPC we will be watching this case proceed and hope this brief and all the other arguments presented before the Eleventh Circuit Court of Appeals convince them to uphold the District Court’s decision. This case will have far-reaching impact on future cases of this nature both in Florida and around the country. 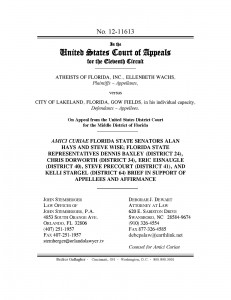 Amicus (or its plural, amici) curiae briefs are documents with information provided to a court to assist in its decision by parties not involved in the case.

(The 42-page document may take a moment to load.)