Abby Johnson has always been fiercely determined to help women in need. This desire is what led Abby to a career with Planned Parenthood, our nation’s largest abortion provider, and caused her to flee the organization, becoming an outspoken advocate for the pro-life movement.

She is the author of the nationally best-selling book, Unplanned, which chronicles both her experiences within Planned Parenthood and her dramatic exit.

Today, Abby travels across the globe sharing her story, educating the public on pro-life issues, advocating for the unborn, and reaching out to abortion clinic staff who still work in the industry. She is the founder of And Then There Were None, a ministry designed to assist abortion clinic workers in transitioning out of the industry. To date, this ministry has helped over 430 workers leave the abortion industry. Abby lives in Texas with her husband and seven precious children.

Be a Part of This Historic Time In History

The pro-life movement is featuring a new awakening as we are noticing the true impact of the pro-abortion movement. Radical abortion laws are being passed around the country and now, more than ever, is the time to fight back. We can no longer be the silent majority. The lives of the next generation matter too much.

Thank you for joining us for this inspiring event! For photos of our dinner with keynote speaker Abby Johnson, please visit our Facebook page. We hope you will join us again in 2020!

Look what others are saying about the Annual Policy Awards Dinner of the Florida Family Policy Council:

“Without a doubt this is one of the best events I ever attended.”
– Paula from Orlando

“Several of my friends who go to dinner fundraisers all the time commented that it was the best event they had ever attended.”
– Lee Anne from Orlando

“It was a very impressive night. Actually it was amazing.”
-Tim from Tampa

“Every year we go to this event and each year it keeps getting better and better. Once again you have exceeded all expectations.”
-Miguel from Miami

Our 2018 Annual Policy Dinner was combined with our GOP Gubernatorial Candidate Forum themed “Together for Florida” in Orlando. The dynamic exchange between Fox News pollster Frank Luntz and the leading Republican candidates, Congressman Ron DeSantis and Commissioner Adam Putnam, focused on many important issues facing Florida’s families and our state. 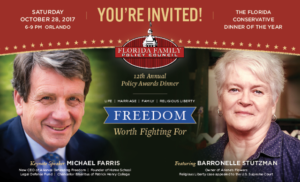 Our 2017 Annual Policy Awards dinner theme was “Freedom Worth Fighting For…” featuring keynote speakers Michael Farris, CEO, President, and General Counsel of Alliance Defending Freedom; and Barronelle Stuzman, the owner of Arlene’s Flowers in Washington whose religious liberty case has been appealed to the US Supreme Court. 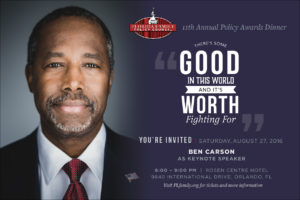 Our 11th Annual Policy Council Awards Dinner theme was “There’s Some Good in This World, and It’s Worth Fighting For,” featuring keynote speaker Dr. Ben Carson, one of the world’s most celebrated pioneers of neurosurgery, former presidential candidate and current chairman of My Faith Votes

Our 10th Anniversary dinner theme was “We Cannot be Silent,” featuring keynote speaker Dr. R. Albert Mohler, Jr., President of The Southern Baptist Theological Seminary, one of the largest seminaries in the world. Time Magazine has called Dr. Mohler the “Reigning intellectual of the evangelical movement in the U.S.” 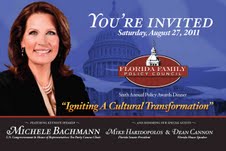 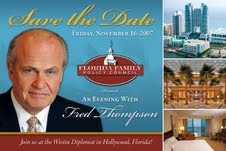