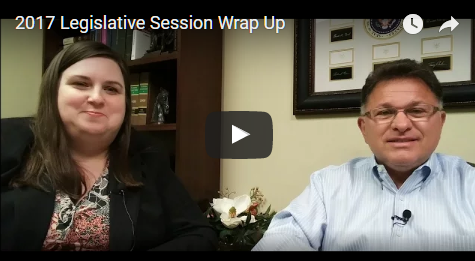 It’s a wrap, folks! After 63 days, the Legislature adjourned at 8:52 pm on Monday night after passing the state budget.  While there is rampant speculation that Gov. Scott may veto the budget and force a special session of the Legislature, the 98-14 vote in the House and a 34-4 vote in the Senate indicates that the Legislature has the 2/3 vote necessary to override any such veto.

The chambers also could not reach a consensus on gambling in the state.  While a joint conference to tackle the issue was established and a few offers were made back and forth, talks broke down over the issue of whether referendums would be required to approve gambling in eight counties which currently do not have it.   Sen. Dana Young (R-Tampa) launched a last ditch effort to expand gambling in the state by introducing an amendment to an unrelated bill which would have allowed fantasy gaming and slot machines.  The House refused to accept the amendment, and the bill was not passed.  The last week of the Legislative session was a busy week with a significant amount of legislation being passed out in the final days while other important pieces of legislation languished and died in the final hour. One such issue was the implementation of Amendment 2, the legalization of medical marijuana in Florida, passed by voters in 2016. Amendment 2 legalized medical marijuana, but legislation is needed to instruct government entities and the population as to how the marijuana is to be grown, processed, and distributed. While both the House and Senate adopted their own bills on medical marijuana, the two chambers did not reach an agreement on a cap on the number of dispensaries in the state, so no legislation on the issue was passed. While John Morgan is calling on the governor to convene a special session to enact such legislation, it seems highly unlikely that Gov. Scott will do so.  That leaves the Department of Health to issue the regulations.

The governor has not yet received “Whiskey and Wheaties” which would allow grocery stores and large retailers such as Walmart and Target to sell hard liquor.  We are launching a campaign asking the governor to veto SB 106.  Please send an email to the governor today!

Thank you for all of your prayers and support during this legislative session.  We could not do what we do without our supporters.  If you haven’t yet given a financial gift to FFPC this legislative session, would you please consider doing so now? While we believe that our efforts are well worth it, the financial cost of being on the ground in Tallahassee is significant, and we could use your help.  You can donate online or call our office at (407) 251-5130 today.

For a list of all the good bills that passed and the bad bills that did not this year, please look at our summary below.

Dubbed “Whiskey and Wheaties,” this bill would allow grocery stores and large retail stores to sell hard liquor in their main store rather than building or renting a separate store to sell liquor.

Late votes (and one changed after roll call) mean that the current vote count is 57-63. However, only votes at the time of the roll call count in the passage/failure of a bill. The governor can veto this bad bill.  To take action, please send an email to Governor Scott.

This bill would allow parents to request a certificate of nonviable birth in cases where a woman has a miscarriage, and the unborn child is at least 9 weeks old.

This bill expands the eligibility for the Gardiner  Scholarship and the amount of the Florida Tax Credit Scholarship.

This bill would require a warning placed on lottery tickets that lottery games can be addictive.

This bill seeks to help children who have been the victims of sex trafficking by requiring the Department of Children and Families (DCF) to maintain a database of services available for victims of commercial sexual exploitation, increases the situations in which a defendant’s confession may be used at trial, outlines procedures for assisting victims, and requires officials to follow up with victims within six months to evaluate services used and their effectiveness.

This bill would prohibit a school district from discriminating against students, parents, or school personnel on the basis of religious viewpoints or expression.  This bill states that a school cannot penalize or reward a student’s religious expression in their coursework, artwork, or other specified assignments.  It provides equal access to all religions and non-religions before, during, and after school. While many people supported this bill, an equal number were ambivalent about it because it simply states what the current law is and does not provide any new or needed protections. Unfortunately, there are very real threats to religious liberty today, and this legislation did not address any of them.

The UN Security Council adopted Resolution 2334 in December 2016, which stated that Israel’s settlement activity constitutes a flagrant violation of international law, has no legal validity, and is a major obstacle to the vision of two states living side-by-side in peace and security. The US abstained from voting when it had the power to veto Resolution 2334.  This Resolution pronounces that the Legislature opposes and requests the repeal or fundamental alteration of Resolution 2334 so that it: is no longer one-sided and anti-Israel and authorizes all final-status issues toward a two-state solution to be resolved through direct, bilateral negotiations between the parties involved.

BAD BILLS THAT DID NOT PASS

The CWA adds sexual orientation and gender identity or expression to Florida’s Civil Rights Act of 1992 as impermissible grounds for discrimination. This bill provides a new way for LGBT individuals to sue employers and small businesses for discrimination and would allow men access to use women’s showers, locker rooms, bathrooms, women’s domestic violence shelters, etc.

This bill which we have described as the worst bill proposed in the Florida Legislature due to its effect on public safety and religious liberty has not been scheduled to be heard in committee. We continue to educate legislators on the dangers of this piece of legislation, and it continues to be dead on arrival despite liberal Republican support.

Expansion of Gambling – SB 8 by Sen. Galvano (R)
STATUS: Passed by the Senate 32-6.  The House amended the bill to conform to its bill which restricted gambling in the state. No agreement was reached in conference between the House and the Senate.

This bill is a massive and unprecedented expansion of gambling in the State of Florida. It ratifies and amends the 2015 Seminole Gaming Compact to allow lottery tickets at gas pumps, slot machines, blackjack, poker games, and fantasy sports to be offered across Florida.  SB 8 would allow 24/7 slot machines in the state wherever approved in a countywide referendum and would permit free or reduced-price alcoholic beverages to be served to those using the slots.  Furthermore, it would allow horse and dog tracks to quit live races and replace the live races with other types of gambling while giving $20 million of taxpayer dollars annually to live thoroughbred racing.  Lastly, it creates an “Office of Amusements” to allow and oversee fantasy sports gaming.

Require school boards to create a code of conduct which includes a prohibition of discrimination on the basis of sexual orientation and gender identity, including the right of students to cross-dress.  Creates “safe environments for safe environments for lesbian, gay, bisexual, and transgender students.Mandates community involvement in this discipline code.

Adds sexual orientation and gender identity or expression to Florida’s Fair Housing Act as impermissible grounds for discrimination. This action would place sexual orientation, gender identity or expression on the same level as and provide the same penalties for discrimination as those for race, religion, age, handicap, etc. This would allow men to enter women’s domestic violence shelters, homeless shelters, etc.

Removes a prohibition against taxpayer dollars going to organizations/clinics that perform abortions. Removes the requirement that the Agency for Healthcare Administration (AHCA) review at least 50% of patient records.

Removes the language in the statute which prohibited same-sex couples from marrying and the State of Florida from recognizing same-sex marriages from other states.

This bill makes it unlawful for people in Florida who are licensed to provide professional counseling and others, like pastors who are licensed counselors, to counsel youth under the age of 18 struggling with their “sexual orientation and/or gender identity” to think and live in a heterosexual manner consistent with their biological gender, even if the child (as the patient) asks for their help to do so.