BREAKING NEWS: Here is my analysis of the current election dispute and the breaking news which happened overnight 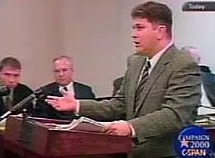 As I write this letter, we still do not have clarity on who will be the next President of the United States in 2021. It is reminiscent for me 20 years ago when as a younger lawyer, I argued an amicus brief before Judge Nikki Clarke in one of the 2000 Bush vs. Gore cases.

I spent the last several days around the clock watching reports and live press conferences switching back and forth between Fox News and CNN. Interestingly, these two networks present radically different views on what is real and factual. So I watch them both to get the most accurate perspective on what’s happening.

The big breaking news from overnight, is the vote count in Georgia tipped over from favoring Trump to favoring Biden who was early this morning now ahead by 917 votes. A vote this close in most states would legally trigger a recount, which would take weeks.

In the final analysis, if Biden did win Georgia, then Trump would have to win AZ, NV, NC, and PA in order to stay in the running, but that would put both candidates into an electoral tie of 269 to 269. The US House of Representatives breaks a tie of electoral college votes, but not all the Congressmen vote. Each state gets one vote in the process. So the electoral college delegates from each state vote to determine the candidate that will get their state’s one vote. In this scenario, Republicans have the advantage, because they will likely have more states than Democrats.

The outstanding issues are in Georgia, Pennsylvania, Nevada, Arizona, and North Carolina. Many press events have involved election officials talking about where they stand with the ballots that have not been counted.

For instance, the Nevada supervisor of elections in Clarke County, where the heavily populated area of Las Vegas is located, announced that 51,000 more ballots would be coming in and counted today, which could have a major effect upon the outcome of the election. They also said they could not legally finish their process until around November 14, 2020. The same mid-November deadline is also the law in North Carolina before the vote can be certified.

Additionally, the Trump campaign has filed lawsuits in four states and are planning to file suit in other states. One of the most serious allegations is that in Philadelphia, poll watchers were denied the ability to physically observe and watch the ballot counting in violation of Pennsylvania law. Eyewitnesses verified that they were not able to watch and physically observe untold thousands of mail-in ballots being counted. In other states, there are allegations that dead people voted, voted in the wrong state, and various other reasons the votes were illegitimate.

The key legal issue in all the legal challenges is whether the rules and laws of each state are being followed? When there are errors or discrepancies found and proved, then a decision must be made about whether the failure to follow the rules was “substantial.” Another way of asking this is, could the violations have made a difference in the outcome of the election?

And from the standpoint of a judge, the further challenge is, if you can prove the substantial violation, then what is the proper remedy? Throw out votes? How many votes to throw out and which ones? How can you determine which are valid and which were illegally cast? Invalidating a vote is “the” harshest of remedies and judges would be very reluctant to do this for fear of disenfranchising a legitimate voter/s in the process. How can you go back and tell the difference in a recount? Would a judge order a whole new election statewide or countywide? That would be unprecedented. Should a voter be punished because the county supervisor of elections did not follow the law? The legal issues are tough and hard for a judge to find a fair remedy.

There is a saying with jury trials that appears in many appellate cases: “You are entitled to a fair trial. You are not entitled to a perfect trial.” That is the problem the Trump campaign is faced with in court. You have to prove that the violation of the law was of such a severe nature that it could have produced a different result in order to compel a judge to take such a drastic remedy as throwing out votes.

First, each state has different election laws and rules enacted by their state legislature. Additionally, the dispute is not just in one state (like it was with just Florida in 2000), but there are close results and legal disputes in five to seven states. Finally, the vote results in each of these states are very, very, close– which is unprecedented.

Florida avoided a razor-close election scenario this year in part because of a commanding result in favor of Trump by 400,000 votes and capturing the votes of Latino voters in South Florida. Then, Governor Ron DeSantis, early on after being sworn in, fired the Supervisor of Elections in Palm Beach County for years and years of incompetence and alleged fraud. DeSantis also made it clear “there is a new sheriff in town,” and he will use his power as the state’s chief executive to dismiss any officer who displays incompetence, especially supervisors of elections.

So how and when will this controversy end? One scenario is that the election result will be known very quickly if one or more of the outstanding states get to a clean finish, giving one candidate a clear 270 Electoral College votes.

Another scenario is that the state of electoral college limbo continues, and the vote counts continue, and the litigation takes us into mid-November or early December.

One major challenge as a nation will be when the news and other media networks start calling the election for one candidate when there is still pending legal disputes. This will increase the national division, increase the grassroots hostility and force courts to resolve the issues as soon as possible.

It may take time, but we need to be patient and prayerful and try not to throw things at your TV or your neighbors who have a different view! One way or another, we will eventually have a result likely by the courts.

This is another reason why it was very smart for the GOP led Senate to confirm Amy Coney Barrett to the US Supreme Court before the election occurred. Not only is she a remarkable justice, but in the event of an election dispute that does go before the highest court, you avoid a potential constitutional crisis with a tie vote. Something as simple as maintaining an odd number of SCOTUS justices protects our republic and ensures the peaceful continuity of government transition.

I know it is frustrating, but all we can do at this moment is to pray for God’s mercy and protection of our country. When events are in front of us, we have a moral duty to act. When events are behind us, all we can do is place our trust in God that he is ultimately guiding history. But this election is not entirely behind us yet, and the President has every right to use every legal avenue available to him to ensure a just result. We can and should pray for the same– a just result.