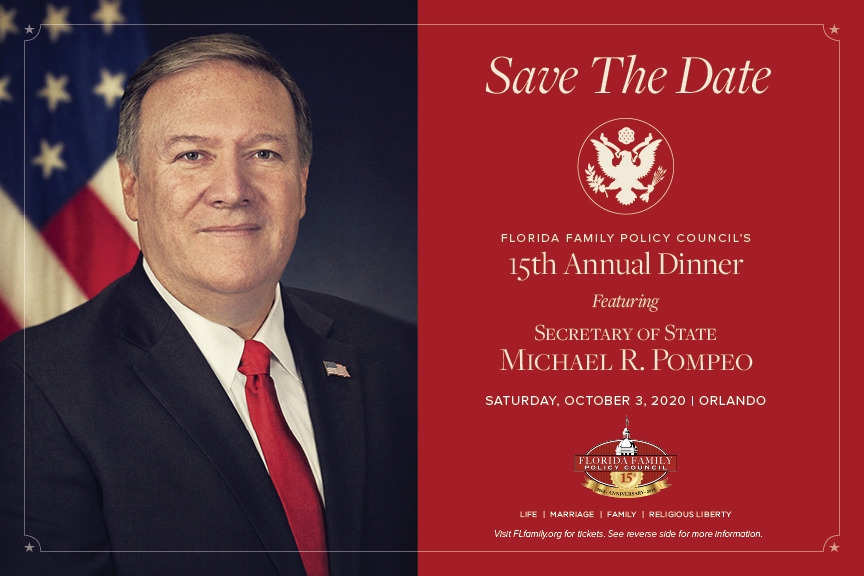 Despite the hotel’s COVID-19 ballroom limitations, which includes spacing tables nine feet apart, this year’s event will fill Rosen Plaza’s largest ballroom to capacity, with an estimated 700 guests from across the state in attendance.

In the past, this dinner event has attracted hundreds of Florida’s most influential and prominent elected officials, businessmen, pastors, major donors, entrepreneurs, opinion leaders, and grassroots activists. Other than the Republican Party Annual Statesman’s Dinner, there is no other statewide event in Florida that is as well attended by key leaders, decision-makers, media, and funders of conservative causes from across the state.

“Secretary Michael Pompeo is a man of great character and faith; whose diverse professional life experiences uniquely qualify him to serve as Secretary of State. We are honored to have an official of his caliber address us and celebrate our 15th Anniversary as an organization. We are also pleased to have Florida Congressman Greg Steube from Sarasota attend the event and introduce the Secretary.”

The Mistress of Ceremonies will be Jannique Stewart of Missouri who works with the Life Training Institute. Three policy related awards will also be given at the event. Finally, there will be a dramatic closing ceremony at the end of the dinner event which honors the British Parliament member, William Wilberforce, who fought for over two decades to end the slave trade throughout the British Empire.

The Secretary’s keynote remarks in the main ballroom are open to legitimate members of the press. Media passes will need to be approved in advanced and secured by Friday, October 2, 2020, at 4:00pm ET. Two separate risers for members of the media will be available in the back of the room with social distance seating available and two “mult boxes” will be available for audio feeds.

For more information, for interviews,
or to secure media credentials for the
event, contact [email protected]
or call 407-251-5130.