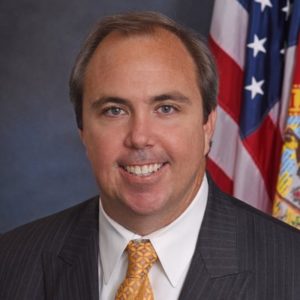 (Orlando, FL) Today, John Stemberger, President of the Florida Family Policy Council called for the resignation of Joe Gruters as Chairman of the Republican Party of Florida because in his role as a state senator he filed as prime sponsor SB438, which seeks to add sexual orientation and gender identity as a new legal protected classes to Florida law.

Stemberger made the following statement regarding this announcement:

“Today we appeal to conservative leaders across Florida and across the country to call for the resignation of Joe Gruters as Chairman of the Republican Party of Florida for his prime sponsorship of the “Florida Inclusive Workforce Act.”  If passed, this bill will be used as a weapon to punish Christians for simply acting out their faith as small businessmen or private individuals.  It also invades the privacy and dignity of female employees in the workplace who are forced to use showers, changing areas and bathrooms with men who claim to be women.  The bill is also clearly in opposition to the express principles of the Republican Party platform. Further, Gruters is totally out of step with the base of the GOP, state legislative leadership, Governor DeSantis’ agenda, the Republican President of the United States and even the most recent U.S. Supreme Court opinion on similar statutes.  These laws are promoted by the far left as a way of getting the state to regulate free speech and suppress religious liberty, as the bills create new lawsuits against business owners for disgruntled employees who claim they were fired for being gay or transgender.  Gruters is supporting the worst possible type of bill in the Florida legislature which infringes on core constitutional rights, free speech,  and religious liberty.  No state Republican Party chairman in the history of America has ever supported a bill this dangerous and irresponsible.  The bill represents both bad policy and bad politics and because of his refusal to pull his support from this egregious legislation, we are announcing a grassroots campaign to unseat him as state party chairman.”

TAKE ACTION NOW:
Republican voters across Florida should contact Senator Gruters and ask him to pull his support from this bill or simply resign as the State Chairman of the Republican Party of Florida.

IMPACT OF THE BILL:
· The bills broad and sweeping language does not stop at merely an employers decisions regarding hiring and firing, but also includes any “terms, conditions, or privileges of employment.” The full language of this bill can be found here: https://www.flsenate.gov/Session/Bill/2019/438/BillText/Filed/PDF

· When Sexual Orientation and Gender Identity (SOGI) are added to even narrow employment nondiscrimination laws, employers are prevented from maintaining separate showers, changing areas, and restrooms for their employees on the basis of sex.  As a result, female employees would be required to share showers, changing areas and restrooms with biological males who claim to be female.

· Employers should be able to maintain gender-based privacy standards at workplaces that have showers, changing areas and bathrooms.  The language of this bill infringes on the rights of employers to set those standards and invades the privacy rights of women who have to work in those environments.

· Biological sex matters in certain jobs and employers should be able to hire women (who stay as women) at domestic violence shelters, daycares, fitness centers, funeral parlors, and nursing homes.

· White paper resource from Family Research Council on the myriad of problems associated with SOGI bills of this nature can be found here: https://downloads.frc.org/EF/EF18L25.pdf

TALKING POINTS:
· Mr. Gruters probably has good intentions but as a non-lawyer does not understand the broad legal impact of the very language he proposes or the bad consequences that stem from these bills.

· Government’s purpose is to protect the freedoms established in the U.S. Constitution. The government must not abuse its power by harassing individuals because of their deeply held beliefs.

· Employers should not be burdened with additional costs, risk and liability of further government regulations as the gender fluidity scale continues to increase each year.

“We endorse the First Amendment Defense Act, Republican legislation in the House and Senate which will bar government discrimination against individuals and businesses for acting on the belief that marriage is the union of one man and one woman…. Ongoing attempts to compel individuals, businesses, and institutions of faith to transgress their beliefs are part of a misguided effort to undermine religion and drive it from the public square…. We pledge to defend the religious beliefs and rights of conscience of all Americans and to safeguard religious institutions against government control.”  See: https://prod-cdn-static.gop.com/media/documents/DRAFT_12_FINAL[1]-ben_1468872234.pdf

· Governor Ron DeSantis as one of his first acts as Governor signed Executive Order 1910, “Reaffirming Commitment to Diversity in Government” which protected the legitimate and immutable categories of “age, sex, race, color, religion, national origin, marital status or disability.”  Governor DeSantis intentionally did not include “sexual orientation, gender identity or gender expression” because he understands the problems which arise from creating a new legal protected class for these categories.

· Just because several more liberal city councils and county commissions have adopted a bad law does not mean the whole state should adopt a bad law.

· You don’t expand the base of the Republican party by proposing a bad law.  Mr. Gruters should be more concerned about keeping the base of his own party intact rather than pandering to people who don’t support him anyway.

· The fact that gay activist groups don’t support the bill because it does not go far enough for them, should give no one comfort that this bill is somehow good public policy.

· Every advancement made by gay rights activists has been through smaller “baby steps” (domestic partnerships to civil unions, to gay marriage, to now silencing people who disagree, etc…) and this bill is a step in the wrong direction to a more fully comprehensive and even more dangerous bill.

· Senator Gruters was given several courtesy calls and opportunities to withdraw the bill but was obstinate and refused.  He now needs to be held accountable for his irresponsible actions.

· Those who have a formal vote as members of the Republican Party should appeal to Chair Gruters to simply pull the bill as a bad idea and not divide the party over this bad bill.