The appointment of Carlos Muñiz is expected
to complete the transformation of Florida’s highest court
into a judicial body with the most reliably consistent and conservative judicial philosophy in the country. 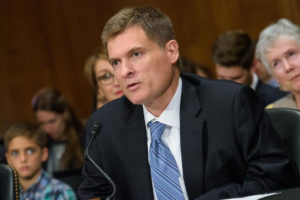 (Tallahassee, FL) Today, Governor Ron DeSantis announced the appointment of Carlos Muñiz to the Florida Supreme Court. Carlos currently serves as the General Counsel at the US Department of Education in Washington, D.C.

“Carlos Muñiz is a man of deep faith and enduring principles.  As a person, he is very smart, no-nonsense, and humble.  As a lawyer, he is extraordinarily experienced and possesses an even-handed temperament.  His credentials and reputation as a sharp legal mind committed to a restrained and conservative judicial philosophy is unquestioned.

The appointments of Judges Barbara Lagoa, Robert Luck, and now Carlos Muñiz to the Florida Supreme Court have completely transformed the court into a judicial body with the potential to have the most reliably consistent and conservative judicial philosophy in the country.  Each of these judicial appointments to the court are highly and uniquely qualified, possess excellent judicial temperament, and are genuinely humble people committed to faith, family and serving their community.  Most importantly, each of them understands the limited role of the court, to interpret law and not make it.  The addition of these three new justices to the supreme court is a game-changer for Florida’s future.  I—along with many other conservative leaders in Florida—praise Governor DeSantis for appointing these outstanding individuals and cementing his legacy for bold leadership early on, which will have a positive affect our state for decades to come.”

Personal and Professional Bio of Carlos Muñiz: Carlos Muñiz is the General Counsel at the US Department of Education in Washington, D.C., appointed by President Donald Trump. Born in Chicago, Illinois, Muñiz speaks fluent English and Spanish and received his Juris Doctorate from Yale Law School where he was an editor of the Yale Law Journal. Justice Muñiz began his career as a judicial law clerk for Judge Thomas A. Flannery of the US District Court, District of Columbia, and then served as a judicial law clerk for Judge Jose A. Cabranes of the US Court of Appeals for the Second Circuit, New Haven, Connecticut. Since then, Justice Muñiz has gained experience as the deputy attorney general and chief of staff in the Office of the Attorney General, Tallahassee, FL; deputy chief of staff and counsel at the Office of the Speaker of the House of Representatives, Tallahassee, FL; and as deputy general counsel for then-governor Jeb Bush. Muñiz is a textualist and believes firmly in the rule of law.

He has been a member of the Federalist Society since law school and has served his community as a civil rights analyst for the US Department of Justice and a policy director for the Republican Party of Florida. Justice Muñiz and his family, while living in Tallahassee, have been parishioners of Blessed Sacrament Catholic Church. He also attends mass at two other Catholic parishes, Thomas More and Saint Luis. The Muniz family are supporters of Open Door Women’s Clinic in Tallahassee, a pro-life pregnancy center and homeschool their children.

Watch Judge Lagoa’s interview with the Supreme Court Judicial Nominating Commission from 2:15 to 28:30.