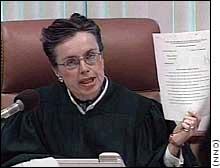 (Orlando, FL) Today, Judge Cindy S. Lederman, a trial court judge in Miami has ruled that Florida’s law prohibiting homosexuals from adopting children was unconstitutional justifying her ruling under the “equal protection” clause of the Florida Constitution.  Judge Lederman ruled that the state had no “rational basis” for denying homosexuals the ability to adopt children.

John Stemberger, chairman of the successful drive earlier this month to pass a constitutional amendment banning gay marriage in Florida, called the ruling “classic judicial activism” and predicted it would be reversed on appeal.

“Everywhere in the law where children are affected, the standard must always be what is in the best interest of the child,” said Stemberger, an attorney in Orlando. “What is stunning to me is that when it comes to dealing with gays, that standard goes out the window.  The studies are clear that children always do better with a married mother and a father.  There are an enormous number of married couples trying to adopt.  Some are even going overseas to adopt and these children can easily be placed in families with a Mom and a Dad.”

“This judge’s ruling is in direct defiance of the rule of law and the will of the people.  It is precisely why the people of Florida recently amended their constitution to define marriage, namely to prevent judges from becoming social change agents and radically redefining natural marriage and family structures.”

Other states that do not allow homosexual adoptions either by law or by practice include Mississippi, Utah, Oklahoma, North Dakota, and Arkansas.