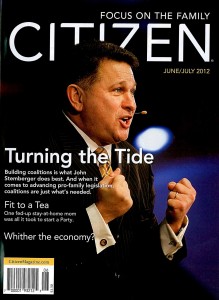 Highlights from the article:

John Stemberger believes in building coalitions. And that’s how pro-family forces in Florida are moving the state in their direction. … “We made sure that the legislative leadership knew these were priorities for us, and that we spoke to them with one voice,” he said. “We never go into battle alone. We always work in coalitions. The Catholic Conference, the Baptist Association, Florida Right to Life—you can’t have enough organizations.”

“Almost all the institutions of society were against us [with the Marriage Amendment],” he recalled. “The media, the public schools, corporations, unions, Hollywood. There was only one major institution that stood up to draw a line in the sand: the church. Without the church, it’s over.”

“Getting pastors involved is a great burden of mine,” Stemberger said. “Pastors can be the guardians of the culture.” … “Can you imagine a pastor in the American Revolution saying, ‘We know the British are coming, but we’re not called to be involved in politics?’ ” he asked. “It wasn’t true then. And it’s not true now.”

As he looks at the ideas that shaped the nation—consent of the governed, separation of powers, inalienable rights stemming from God, all people created equal—he can’t imagine them springing from most of the world’s religions, much less from a strictly secular worldview. “What we have in America—this is not to be arrogant—springs from the Judeo-Christian suppositions of the Old and New Testaments,” he said. “Only Christianity could have created the American experience. And only Christianity can save it.”