Judge Robert Luck from the Third District Court of Appeals
will move with his family from Miami to Tallahassee
to sit on the Florida Supreme Court. 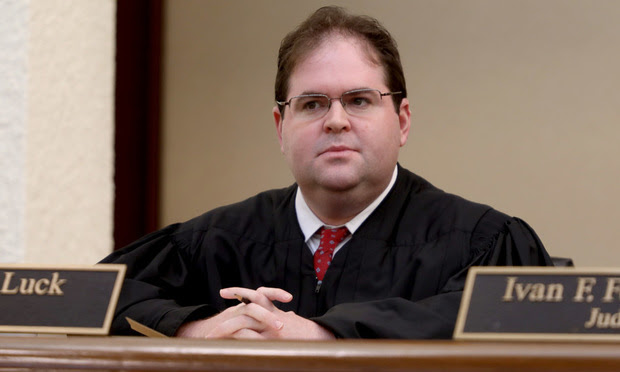 (Miami, FL) Today, Governor Ron DeSantis will announce the appointment of Judge Robert Luck to the Florida Supreme Court.  Judge Luck currently sits on the Third District Court of Appeals (DCA) in Miami.  The Third DCA is the appeals court between the trial court and the state supreme court in South Florida.

Judge Luck is being picked for an at-large seat and is the second of three appointments that Governor DeSantis will make to replace three of the most liberal justices who termed out for mandatory retirement at age 70 on Tuesday, January 8, 2019.  Last week DeSantis also appointed Judge Barbara Lagoa to the Florida Supreme Court.

“Robert Luck is a brilliant jurist. To speak with, or listen to Judge Luck, is to realize you are in the presence of a truly unique and Scalia-like intellect.  Luck fully understands that the role of a judge is a limited one of restraint.  He has demonstrated over the years through his written decisions and public statements, that the job of a judge is to interpret law as it is written and not make law or engage in result-oriented decision making.  As an observant Jew, Luck is also grounded in ethical and moral principles that will surely guide and inform his service to the state of Florida.  Once again, Ron DeSantis has made a very solid appointment that will help to define his legacy as Governor for years to come.”

Regarding judicial philosophy Judge Robert Luck has stated the following:

“I understand how the judiciary — what Hamilton called our least dangerous branch — fits into our system of government… Having worked in each of the three branches, I understand the modest role of the judge in reviewing the laws enacted by the legislature, the actions taken by the executive, and the findings of the lower courts… I have conducted myself that way for the last five years, and I will continue to do so as long as I am permitted to serve.”

Robert Luck currently sits on the Third District Court of Appeals and prior to that served on the Eleventh Judicial Circuit Court of Florida as a trial court judge. His district court nomination was made by Governor Rick Scott.  Born and raised in Miami-Dade County, Judge Luck would go on to graduate magna cum laude from the University of Florida Levin Law school and gain a prestigious clerkship with Chief Judge Edward Carnes of the 11th Circuit in Alabama. Judge Luck also has experience as Deputy Chief in the Major Crimes Section in the United States Attorney’s Office for the Southern District of Florida. As a trial judge he tried seventy jury trials, as an appellate judge he has written over 70 decisions and has heard dozens of appeals from the county court and municipal agencies.  Robert Luck is part of the Miami Jewish Legal Society and currently lives in Miami-Dade County with his wife and two children.  The Luck family attends a Chabad synagogue in Miami.  Chabad is one of the largest observant and orthodox movements within Judaism worldwide.