Marriage: What Will SCOTUS Do? 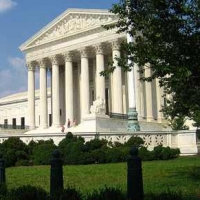 Next week the Supreme Court is expected to issue a decision on same-sex marriage.  The court will be deciding two lawsuits, challenging the constitutionality of the federal Defense of Marriage Act (DOMA) and California’s Prop. 8. Both of those laws define marriage as a relationship between a man and a woman.

Those challenging these laws are arguing that it is actually unconstitutional to define marriage as a relationship between a man and a woman.  They have asked the court to strike down these laws and impose their definition of marriage on every state in the nation regardless of how the people in that state feel about the issue.

Here is a look at the various scenarios that could result from their decision.

The most significant legal issue that doesn’t directly address the constitutionality of marriage is the issue of standing.  Standing is a legal concept that addresses who can be a party to a lawsuit.

Typically, you can’t be a party to a lawsuit if you aren’t personally involved.  You may be angry about the fact that someone ran into your mother’s car, but you can’t sue them on behalf of your mother.  She has to do it herself.  You have to actually be a party with an interest in the case.

In their absence, the U.S. House of Representatives and the Prop 8 campaign have stepped in to defend the laws.   Plaintiffs in these lawsuits have challenged their standing.  So, before deciding the constitutionality of the issue, the court must decide whether the parties defending the marriage laws in court are legally able to do so.

There is a possibility the court could make a decision on the standing issue that avoids the underlying question entirely, which would be anticlimactic.

However, assuming the court does rule on the underlying marriage question, here are the range of options that are likely to come from the Court’s rulings.

Whatever happens next week at the Supreme Court, the discussion about marriage will not be over.  Even Roe v. Wade only started a movement that is now winning the debate over abortion.

This will be an important decision in the ongoing debate over the definition of marriage.

But perhaps more critically, it could determine whether the American people are able to govern themselves on this critical issue.   The plaintiffs are asking the judges to impose their definition of marriage on every state in the country, regardless of how the people feel about them, and tell the hundreds of millions of Americans who have voted to support marriage as a relationship between a man and a woman that their perspective is forbidden by law.

This is about marriage, but it is about much more than that.

Stay tuned until next week and pray that truth wins.