“I will never think of Thanksgiving the same way again…” 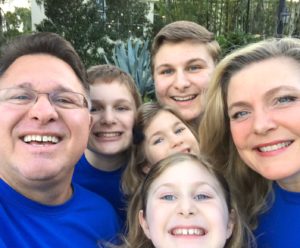 The Stembergers, all six of us, have been on a road trip the past couple of days to North Carolina to visit extended family for Thanksgiving. During our trip, my wife Olivia, who is the “chief domestic educator” in our family, has been reading parts of a book to us and then playing a fascinating interview with the author on the historic facts surrounding the first Thanksgiving celebration. The interview is a replay of a remarkable Family Life Today radio show between host Dennis Rainey and a Christian historian from Wheaton College, Dr. Robert Tracy McKenzie, author of the book, The First Thanksgiving.

After listening to this extraordinary interview, I will never think of Thanksgiving the same way again. In fact, it seems as if almost every stereotype I had about the first Thanksgiving was wrong! 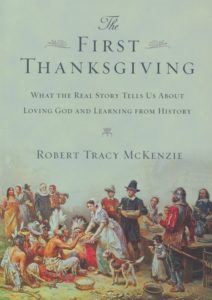 In the place of all those now iconic, but inaccurate, grade-school images burned into my memory (like tall black hats with belt buckles, turkeys and pumpkins) is a newfound respect and admiration for this group of rugged and fiercely committed men and women. Half of those who came in 1620 gave their lives in the effort to establish a place where they could be free to believe, worship and act on their faith in the way they felt was demanded of them by Scripture.

In 1620, the Puritan separatists left Europe on the Mayflower housed in the cargo space called the “tween area”, which is in the middle of the ship (about a 4-5 feet high confined area, half the size of a basketball court).  They were there for a miserable 66 days, rarely, if ever going above to the top deck.The Mayflower carried 105 people, 51 men, 20 women, 21 boys and 10 girls, plus the crew. Think of the privacy, comfort and sanitation – or lack thereof!  During the two month voyage, two of the men died and one baby was born on the ship. God bless that mother!

They thought their navigation was taking them along the same latitude as balmy Spain and expected lush tropical conditions in the new world. When they finally hit land in November, it was much further north then they had planned. They were met with a freezing cold winter in Massachusetts. Because the water was so shallow, the ship could not dock close to land and was anchored about a mile offshore. Many of the men waded through the freezing, bitter cold water for that mile while carrying all of their supplies and equipment. 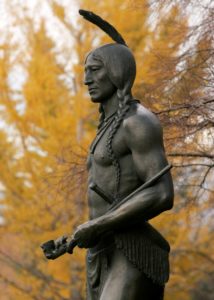 This is one of the major reasons that roughly half of the people on the Mayflower died from sickness during that brutal first winter. Of the 18 married couples present, 15 of those couples had either the husband or the wife die.

After the bitter winter, they set up shelters and then in God’s remarkable providence, they “happened” to meet Squanto, an English-speaking American Indian. Just think… if they had landed in a different place, just a few miles further to the north or south they may never have met. Seriously? What are the odds? Squanto was invaluable; it can easily be argued that they may not have survived without him. He taught them how to fish, plant crops, and hunt in this new rugged environment and how to negotiate with the other Native Americans in the area.

After a good harvest in the fall of 1621, the Pilgrims famously shared a harvest feast with the Pokanoket Indians to give thanks to God for the bounty; this meal is now considered the origin for what we know as Thanksgiving. It was a meal heavy on meat, lots of deer, some foul, maybe duck or swan, and corn. There was no turkey, no pumpkins, no potatoes– and while it is possible there were cranberries, there was no sugar so nothing very sweet was served.

This story continues with amazing details which I would encourage you to explore below. I am in awe at how God’s hand guided the founding of our young country. The word miracle is not too strong a word to describe how these sturdy Christian men and women, who suffered greatly, survived unimaginable circumstances and went on to plant the seeds for our country to grow and become a great nation.

When they arrived, the 41 colonists signed our country’s first social/political governing document, the Mayflower Compact. It was a covenant before God with the theme of self-governance and described how the colonists would create order and laws.  Most scholars believe this document had a great influence on both the Declaration of Independence and the U.S. Constitution.

In the Mayflower Compact they described the singular purpose for which they “voyaged to plant the first colonies in the northern parts of Virginia…”. While it is not found in most secular, faith-sanitized history books, the settlers made it clear why they were here “for the Glory of God and advancement of the Christian Faith.”

This was the purpose for our country’s founding and this is why we, as Christians, should  continue to engage the culture, government and politics. Now more than ever, we need responsible Christian voices influencing our government. I would argue that we will never maintain a civilized society, with either Republicans or Democrats in power, unless Christian principles (which are the seeds of liberty) are prominent in the process.

This is one of the main reasons the Florida Family Policy Council exists and why we continue to fight for the good in this world.

Please know this Thanksgiving how very grateful we are for your support.

P.S. Please take time to read and share the below resources on the first Thanksgiving with your family and friends.

3-4 Minute videos by the History Channel on the first Thanksgiving:

The Mayflower ship and its Journey to the New England
http://www.history.com/topics/mayflower/videos/deconstructing-history-mayflower

Things you probably did not know about the first Thanksgiving
http://www.history.com/topics/thanksgiving/history-of-thanksgiving/videos/bet-you-didnt-know-thanksgiving

16 short 3-4 minute videos on the history of Thanksgiving
http://www.history.com/topics/thanksgiving