Highlights from 15 Years of Faithful Service

In a day when many are losing hope in the future, we are inspiring people to reclaim hope.

Over the last 15 years, through the prayers and support of our mission partners, the Florida Family Policy Council has been established as one of the nation’s premier public policy organizations. Today, we remain relentless in our pursuit of those things which the unchanging God calls right, just and beautiful.

In 2020, we celebrated our 15th anniversary as an organization. To commemorate this special milestone we created a 15th anniversary brochure (PDF) to give you a concise overview of our accomplishments and achievements over the past 15 years.

Thank you for your interest in our work. We would welcome your financial support by making an online contribution here. 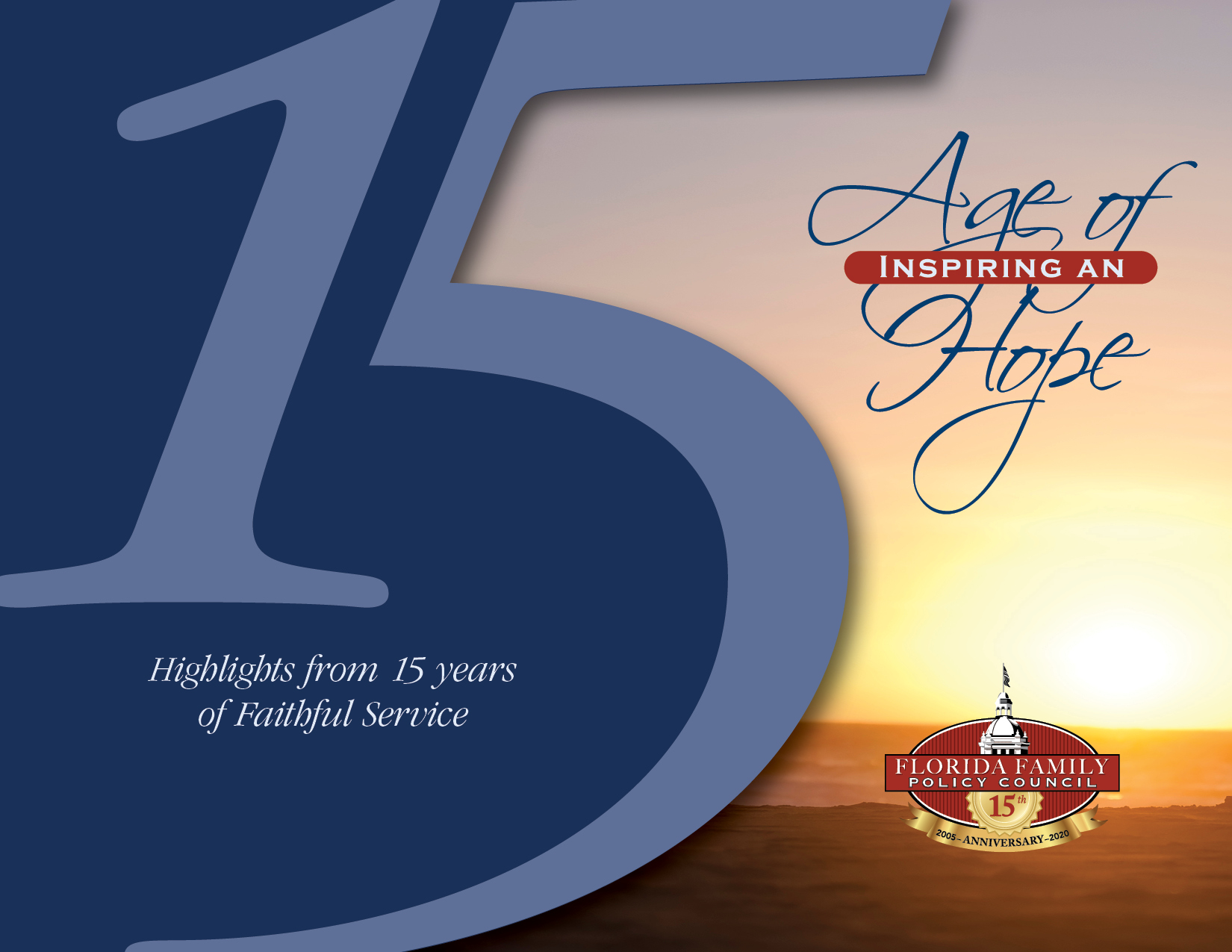 15 YEARS BY THE NUMBERS

2005 – Incorporated in 2004, Florida Family Policy Council officially associated with Focus on the Family in 2005. John Stemberger stepped down as Chairman of the Board and was hired as President and General Counsel.

FFPC helped organize a national rally and wrote articles used around the country to argue for saving the life of Terri Schiavo. Stemberger appeared on MSNBC as an expert legal voice opposing euthanasia.

2006 – FFPC created the first statewide Judicial Voter Guide and filed a lawsuit against the Florida Bar and Judicial Ethics Commission to allow judges to answer a questionnaire without violation of gag order. Stemberger publicly debated Florida Bar President. In response to the FFPC lawsuit, the Florida Bar created a judicial questionnaire for judge candidates.

FFPC celebrated its first Annual Policy Awards Dinner with over 1,000 in attendance. Florida Governor Jeb Bush was the keynote speaker.

2007 – FFPC established a full-time legislative staff presence in the state capital of Tallahassee.

FFPC also sponsored an exclusive showing of the William Wilberforce movie Amazing Grace at the request of Speaker of the House Marco Rubio, who invited his fellow legislators.

2008 – FFPC prevented the State Board of Education from teaching evolution as a fact and brought Ben Stein to Tallahassee to lobby legislators on a bill requiring a critical analysis of evolution and to promote his new movie Expelled: No Intelligence Allowed.

Also, in 2008, Florida’s Constitution was amended to define marriage as between one man and one woman with a 62% vote margin, by nearly 5 million voters.

FFPC organized “Date Nights” for couples every Tuesday evening for a month at 12 Chick-Fil-A restaurants in Palm Beach County. Pastors and lay leaders adopted each store location, and dynamic ministry took place as marriages were strengthened, restored and healed.

FFPC and staff hosted or spoke at more than 30 pastors’ conferences statewide, educating and equipping pastors to know their legal rights relating to elections and legislative issues and challenged them to know what the Bible says about politics.

2013 – FFPC lead the “On My Honor” campaign nationwide to try to stop the Boy Scouts of America from changing its membership policy to allow openly gay members. FFPC President John Stemberger lead the creation and launch of Trail Life USA, a national Christian scouting movement for boys, focused on adventure, character, and leadership, now with nearly 30,000 members with troops in all 50 states.

2014 – Started the first annual Pro-Life, Pro-Family Days at the Capitol event. Each year, 200-300 supporters now come to this Tallahassee event for training, briefings, the Legislative Prayer Breakfast, and lobbying their local legislators on issues of importance to our mission.

Defunded Planned Parenthood. After urging Governor Rick Scott in a private meeting and then a public campaign to defund Planned Parenthood, FFPC worked behind the scenes with Speaker of the House Richard Corcoran to zero fund the organization, which is the largest abortion provider in the country. State funds do not go to Planned Parenthood anymore as a result of this significant victory.

Organized a nationally televised discussion forum “An Honest Discussion about a Difficult Election.” Thousands watched, and many reported the event being very helpful in thinking through the choice for president in 2016.

2017 – Our President John Stemberger was appointed to the historic 2017-2018 Florida Constitution Revision Commission by Speaker of the House Richard Corcoran. The 37-member commission only meets once every twenty years to review and propose changes to Florida’s Constitution.

Mobilized 300 women in Jacksonville to demonstrate outside City Hall and urge Mayor Lenny Curry to veto the so-called Human Rights Ordinance, which compromises women’s privacy and dignity in dressing rooms by allowing men in these private spaces. After promising to veto the bill, he refused to do so.

Mobilized 75 volunteers to hurricane-ravaged Panama City who lived there for 7 days walking doors and offering voters a ride to the polls. Those who worked “Operation Panhandle Vote” also prayed with people in despair, offered voter guides, water, and information on emergency polling places.

2019 – Honored Florida’s Pregnancy Center Directors at the Pro-Life Days at the Capitol event. Pam Tebow told her story of almost aborting her baby son Tim Tebow and then she honored all the directors present with a rose. Later the attendees had a private audience with Florida Supreme Court Justice Robert Luck.

FFPC also hosted a private showing of the major motion picture Unplanned, in Orlando and Tallahassee movie theaters for legislators and supporters with special guest actresses Ashley Bratcher and Robia Scott. Unplanned is the real-life story of Abby Johnson, the former Planned Parenthood director who has become a pro-life hero.

2020 – 30 years in the making, FFPC provided leadership to see the Parental Consent Before an Abortion bill passed the Florida Legislature and was signed into law by Governor Ron DeSantis.

FFPC organized a national webinar for pastors and Christian leaders featuring Dr. Albert Mohler and Dr. Wayne Grudem and others on the topic of a Culture Wise Church and wise leadership approaching the 2020 elections. More than 3,000 pastors viewed the webinar around the country.